Sale on canvas prints! Use code ABCXYZ at checkout for a special discount!

Those Inevitable Signs of Aging

Previous Next View All 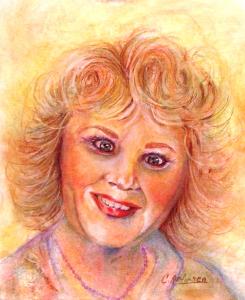 The ugly truth is out! Unless you have a bank account like Jane Fonda or Cher, eventually you’re going to fade, rumple and sag. The time will come when you can’t hide your age behind a MuMu or a Caftan. Sing the bye-bye blues baby because gravity takes its toll.

When elephants get wrinkled and leathery it’s quite fashionable. Their tough skinned outer wrapping protects them from assault and predators. Unlike human beings, the oldest elephants in the herd are given respect and power. They’re not ignored or put out to pasture just because their old.

Older people are difficult to draw or paint. Some artists draw lines for wrinkles which make them harsher and more unattractive than they need to be. Shading will produce a more subtle result. By highlighting the highest skin areas on either side of the shaded fold, you get a softer wrinkle.
My husband and I recently had our photograph taken. The photographer asked us if we’d like a “touch up.”
“How much?” I asked him.

“$60,” he quipped; “but it will remove spots, wrinkles, and even the sag under your chin.

Humph, I thought to myself. The proofs looked pretty good to me.

“I want my children and grandchildren to recognize me,” I said as I added a disgusted “No, thanks!”
Why are we so afraid of aging? Why do we treat our seniors and middle-aged population as if they’re no longer worthy? No longer capable of holding a job?

We should equate aging with wisdom. Knowledge and experience are nothing to sneeze at.

I’m saddened by our youth obsessed culture that lives from one high to the next either drug induced or in exaggerated self adulation. The newspapers record their escapades and their fall as if none of it really matters, but it does.

We only have one life to live. I for one am trying to make the most of it – wrinkles, sags and all!